Back in the late eighties I was a cycling fool.  When I tell the wife that she says I’m half right.

The summer of ’89 was hot.  I used to ride south of Elyria into Amish country.  I would take two water bottles and usually after an hour or so I’d run out of water.   First time that happened I was passing a farm with a pump in front of the house.  There was an old man sitting on the porch.  I rolled up and asked if it would be okay if I filled my water bottles at the pump. He told me to take as much as I wanted and after I filled them he invited me to sit on the porch for a bit. 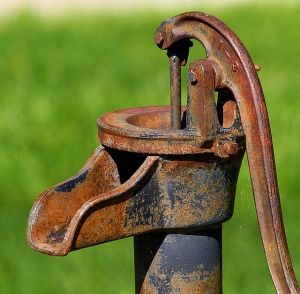 The water was cold coming from the well and I put the one bottle back on the bike and carried the other up to the porch and sat down. The man and I hit it off immediately.  He told me about his life and family.  As he talked I took a swig of the water and my eyes bulged out.  The water was heavy in sulfur and hit me like a rock to the side of my face. I had to get back to my ride so I bid farewell and headed off.

I drank that nasty sulfur water and it was brutal.  It affected me in many ways and I can guarantee that no one drafted me after that.

Every time I rode south I would stop at his farm, load up on the sulfur water and have a nice visit.  One time he pulled out an old guitar and played a beautiful spiritual.  I took my turn with the guitar and played an old Mississippi John Hurt song.

This went on all summer long and as Autumn came in I rode up to his house and we talked and told him I probably wouldn’t be on the bike until Spring.  He said he enjoyed my visits but had a question.  Why did I drink that nasty water from the well all summer?  He said that he had city water and that no one drank from the well because it was so nasty.  He said his grandson drank from it once and called it Satan’s Well.

I went back a few months later and the farm was up for sale.  The old man had died right after Christmas.  I’m lucky that I got to know him and it was worth it, even if I had to drink from Satan’s Well.

Posted by leastbest on April 29, 2013 in Uncategorized