Took my iPhone 5s to the Apple Store today and they replaced it quickly and easily.  I got my pictures that I took back too. Back to the bike ride.

My Ford Ranger air bag light came on so I took it to the dealership to get repaired.  They said it would take a couple hours to get fixed.  A perfect opportunity for a bike ride.

I had never been to Norwalk and knew it to be a ways away so I dropped the car off and headed west.  I took Route 18 even though it is 55 mph with a lot of traffic.  The streets of Wellington are wide with big beautiful houses.  I love the town and admired the houses as I rode out of town.  It wasn’t long before I was out of town and each mile the field grew bigger with old farm houses farther apart.

Being raised by an agoraphobic I never realized how isolated I had been.  I’ve never gone west this way.  I love the open road.

Finally I came to my first town, Brighton.  Brighton is just a crossroad with a church and gazebo.  Brighton has a population of 942.

Church where I went for water

Not a lot to see. I took a short break in Brighton and moved on.  There was a lot less traffic and the weather was terrific.  Miles passed quickly. Before I knew it I was in Clarksfield.

Clarksfield is another small town with no real town.  Just a couple old buildings and a church.  According to Wikipedia the township has a population of about 1500.  It looked like a nice place to live.

Really bad picture of a church in Clarksfield

A sign said that Norwalk was twelve miles farther and I probably should have turned around but it was such a nice day I had to do it.  I kicked it into high gear and moved on.  There was nothing here at all.  Just fields.

I was getting low on water as I only (stupidly) brought one bottle).  I saw a motorcycle club up ahead and stopped in but no one was there.  From the lettering on the door they were obviously nice fellas.

I was out of water and getting tired.  Normally I ride twenty-five miles at a time and I had nearly done that.  I was getting closer to Norwalk.  I could tell.  Also I noticed large numbers of motorcyclists out and about.

At the outskirts of Norwalk I came up what I though was a house and then I realized it was a diner.  The only way I realized was the people in the parking lot.

I went in and down a couple of waters and ordered eggs and toast.  This was a nice little place.  Probably fit twenty people at most.  There were a lot of bikers in there and after striking up a conversation I found out it was bike week in Norwalk.  That explained it.  I had a nice meal and refilled my water bottle.  That is when I realized my phone wasn’t working.  Both the GPS and the actual phone wasn’t working.

Misspelled Courteous: Plus I had better be nice

I headed off into Norwalk.  I breezed through downtown with the big buildings and once through town I stopped on the steps of a church.  I planned to check out the map on my phone and see if I could take a different way back.  Out of nowhere a woman came over and asked if I was ok.  She saw me put the bike down and then sit down.  She was afraid I was having a heart attack.  She had one twenty years ago and wanted to make sure I wasn’t having one.  I was fine but took her bottle of water.  We talked and I found out she used to live in Avon Lake in the seventies and eighties.  She told me her old address and I realized that I used to deliver there when I worked at UPS.  It’s a small world.

I was beat and needed to head home.  I didn’t end up taking any pictures of Norwalk.  The only one I could find on Flickr that would allow to be copied was this one by David Wilson: 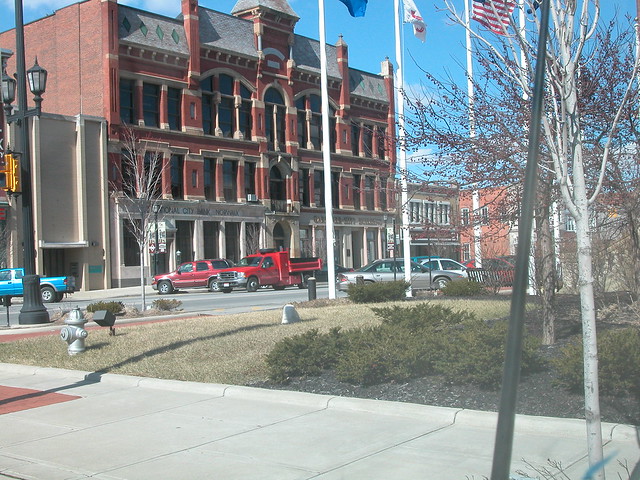 At the church I realized that my phone wasn’t working properly.  I couldn’t pull up my map and the agaraphobic raised part of me got a little anxious.  I decided to just take 18 back home.  Off I went.  After a few miles I realized that I didn’t recognize any of it.  Then I saw the sign for East Townsend.  I didn’t go through it to get to Norwalk so I realized that I was on Route 20.  Route 20 runs about five miles north of Route 18 and each mile I rode on it I was getting farther away from Route 18.

East Townsend was little more than a fire station.  The township itself has a population of about 1500 people.  I headed south on the very next road that I came to.  At first there were a couple of McMansions but a couple miles farther down the road it was desolate.  I wasn’t even sure if I was on the right road to where I wanted to be.  I could feel a twinge of anxiety.  There was nothing and finally I could see Route 18 in the distance.

Once back on Route 18 I was tired.  I made through Clarksfield and took a long break at Brighton.  I had seen a water spigot at the church and stopped to find a lock on it.  Damn, I was out of water.  Oh well.

I finally made it back to Wellington.  I stopped at a convenience store and bought a well deserved root beer.  While drinking it a biker came up on a Harley.  After getting his drink he told me that he rides too and has a Cannondale.

Posted by leastbest on June 8, 2014 in Uncategorized